Are your old back-up CDs and DVDs dying?

Those recordable CDs and DVDs you’ve burned precious data on from the 80s and 90s might be empty discs just taking up space, according to scientists at the Library of Congress. Just take a look at the image below. Two identical CDs, commercially manufactured in in 1984, subjected to rapid aging at the LoC, created two very different results. 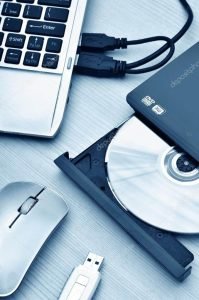 “All of the modern formats weren’t really made to last a long period of time,” said Fenella France, chief of preservation research and testing at the Library of Congress. “They were really more developed for mass production.”

France and her colleagues are trying to figure out how CDs age so that we can better understand how to save them. This is a tricky business, in large part because manufacturers have changed their processes over the years but won’t say how. And so: we know a CD’s basic composition—there’s a plastic polycarbonate layer, a metal reflective layer with all the data in it, and then the coating on top—but it’s impossible to tell just from looking at a disc how it will age.

“We’re trying to predict, in terms of collections, which of the types of CDs are the discs most at risk,” France said. “The problem is, different manufacturers have different formulations so it’s quite complex in trying to figure out what exactly is happening because they’ve changed the formulation along the way and it’s proprietary information.”

Even CDs made by the same company in the same year and wrapped in identical packaging might have totally different lifespans.
The Library of Congress Wants to Destroy Your Old CDs (For Science) by Adienne LaFrance, TheAtlantic.com

But, that’s regarding mass-produced manufactured CDs and DVDs – not the hundreds of spools of CDs and DVDs you’ve burned yourself with back-up data (and maybe a few mix-tapes), right? Well, it turns out those recordable CDs and DVDs have even more complicated degradation issues because the organic dyes that are used for these discs break down faster.

The most damaging part of the recordable CDs and DVDs may be our own human error, however:

Again, France: “People are generally more concerned about the scratches on the bottom, but actually you can get quite a lot more damage when you get scratches on the top layer because it goes through and impacts the metal reflective layer. So quite often you find people are really careful not to put their hands underneath, but holding it in the middle is better.”

It’s also better not to muck up the top of your CDs with labels—the adhesive creates chemical reactions that quickly eat up data—or even permanent markers. “The moment you start to write on that top layer, you’re setting yourself up for degradation,” France said.
The Library of Congress Wants to Destroy Your Old CDs (For Science) by Adienne LaFrance, TheAtlantic.com

If it’s been a decade since you last checked on those CDs and DVDs in the storage cabinet, dust them off and take a look. If you find they’re still readable (and you still need their data), then one option for you is the  M-disc, which is made from a non-organic write layer and can sustain much more abuse than a mass-produced organic write layer of the traditional CD or DVD (see the Torture testing of the 1000-year DVD on ZDNet).

And for those mix-tapes you made in college, perhaps it’s time to transfer them over to a high quality mp3. Your grandchildren (may) thank you.

If future data back-ups are a concern for you, perhaps it’s time to have a chat with one of our IT professionals. Contact our Irvine office.